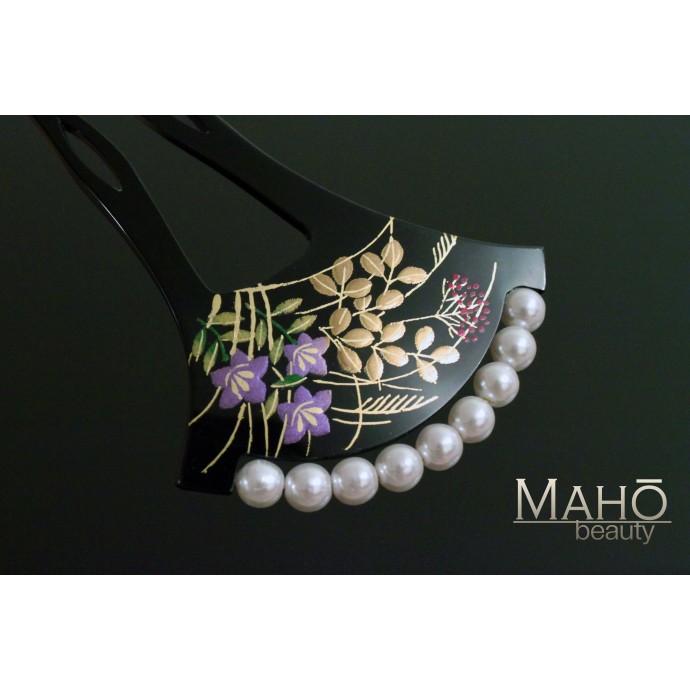 Very beautiful with patterns even at backside.
The top of the comb is decorated with a line of stylish 8 mm spherical faux pearls. Comb teeth have enough length (7~8cm) to hold even thick hairdo.

The styling of this lovely comb is typical of Japanese design. The comb is made in glossy black resin. The heading is hand decorated with lacquered design done in gold with lovely picture of Kikyo and Hagi flowers which both represents Japanese Autumn.

Kikyou (ききょう) or Japanese bellflower is a wildflower intimately associated with the Autumn season in Japanese culture. With its vivid purple blossoms that come into bloom at the end of summer, kikyou is considered one of Japan’s “Seven flowers of Autumn” (Aki no nanakusa*). It is mentioned in numerous haiku devoted to the season. Japanese geisha adorn their hairstyles with hana kanzashi, or flowered hair ornaments, as dictated by the season; in the month of September, these traditionally include kikyo. As its balloon-like buds bloom into five petals in an arrangement, resembling a star kikyo is also often used to represent the interconnected relationships between the five elements of wood, earth, fire, water and air.

HAGI, whose Kanji character – 萩, when broken down to its elements actually means AUTUMN GRASS, has long been a beloved plant in Japan, deeply connected with autumn. The blooming of Hagi, a shrub whose small, purple or white flowers start appearing in late August, was indeed an important symbol of autumn for the ancient Japanese. Women would decorate their hair with its sprigs (this is evident from several extant poems). Hagi was an important symbol of autumn, featured as a motif on painted scrolls, painted screens, kimonos, etc. It symbolized GROWTH and energy of LIFE to the ancients for it’s ability to grow back very quickly when cut down even to a stab.

* 秋の七草 (aki no nanakusa) The seven grasses of autumn were often mentioned in verses of the Manyoshu, the earliest collection of Japanese poetry and song. These seven autumn flowers provide visual enjoyment. Their simplicity was very much admired: they are small and dainty yet beautifully colored. The capacity of the autumn grasses to inspire deep emotion among people in olden days may be viewed through their composite nature of beauty tinged with sadness. More than flowers of any other season, autumn grasses washed by rain and bent in the wind attain a beauty unsurpassed, and because of this type of beauty they were also the flowers used for the tea ceremony.